The Hunt Is On: finding our new boat and moving onboard Now that we had the house sold, we needed to find a boat -and pretty pronto at that! We accepted the buyer’s offer on September 13, 2014 and had to be out by November 13th. That gave us two months to find a boat that would also be our new home. As some of you know- this is a huge challenge. Many people take a year or more to find the ‘right’ boat, and not even necessarily one they plan to live on!

So, the search began (oh, and did I mention we were still trying to sell all of our things during this process? Yikes!) We looked at seven boats before we found her. Some boats were in impeccable shape, some were in need of quite a bit of work- then we found her. She was in the latter category. She was a 40 foot Bavaria sloop built in Germany in 2002.

The broker told us to board ‘with an open mind’. As we stood in the cockpit, we all began removing our shoes. Then the broker said, “That’s okay, you can leave them on.” I insisted, “No, no, we’ll take off our shoes….” then I glanced down inside the main cabin of the boat and saw that the floor was visibly quite dirty. Like covered in bits of paper and dirt and random stuff. “Oh, maybe we should leave them on.” I said with a chuckle- not really knowing what we were in for. We all put our shoes back on and proceeded down the companionway. It was an interesting sight. Dirty pots and pans were piled in the galley along with several ‘random’ items like paper towel rolls, funnels and cleaners (not sure what those were being used for!?) The heads stunk with dirty, moldy shoes in them and a rice cooker sat in the wet head along with several other random items. Cushions were strewn about and fishing rods were hanging from the ceiling. A ‘custom made?’ shelf protruded from behind the galley sink, completely obstructing a seating area and housed a large microwave, teetering on the edge of it’s life. When I asked the broker if he wouldn’t mind moving the pots and pans so that I might get a wee peek at the fridge, we discovered a package of bacon that had rotted in there for the past several months and were hit with the nastiest smell ever (yep- even worse than the stinky heads!) The v-berth was used as a life jacket locker and petri dish for fungi. Wow. Needing an open mind was right. It was a mess! However… she was below our budget and the broker dropped a hint that we could get her for  a good deal. The layout was perfect for us. One large aft cabin, a very spacious v-berth, two heads and lots of space in the cockpit’s storage lockers. We knew she needed a lot of TLC, but since we had been through the revival of our previous boat, we figured we could handle another one. So, in October, we put our offer in and it was accepted! The possession date would be November the 14th – the day after we were to move out of our house.

We spent our last night in the house sleeping all together in a ‘bed’ we’d made from as many blankets as we could and snuggled up by the fire watching Star Wars on the TV (which was 42 inches and mounted on the wall, so ‘came’ with the house for the new owners, LOL) Every speck of furniture that was in the house had been sold. Whatever was left in the house was going to the boat. It was an extremely exciting night, but also extremely uncomfortable and included several awakenings due to body parts that had fallen asleep. Our last night in the house, sleeping on the floor in a pile!

The next day, we handed in the keys to the house but weren’t getting possession of the new boat until the next day. So, down to Blaine, Washington we drove and spent a (freezing) night on our ‘old’ boat. It was really fun and gave us a chance to say goodbye to friends we’d met down there. Then off we went in the morning to our new home. After several loads from the car in a wobbly dock cart, we somehow by way of miracle managed to get everything on the boat (not to mention the three 4′ x 3′ storage lockers at the marina in Sidney we were moving to that Jason filled up via rental van a couple of weeks before). We then had to do the ‘car shuffle’ and drove our car to a parking lot and left it there to pick up within the next week or two and bring it over to Vancouver Island, where we were moving. Jason had a friend drive him back down to Point Roberts, WA, where the new boat was located and dropped him off so that we were now carless and ready to sail over to Sidney. Oh- and did I mention we didn’t really know how to sail yet? Or perhaps the sea trial counts as a lesson?

After a couple of days of getting unpacked and sorted, we decided to just untie the lines and go for it. We headed out on November 16th and went to Semiahmoo Marina, as they were the closest marina with an open fuel dock and we needed diesel. We stayed the night there on the fuel dock (a bit too nervous to dock in a ‘real’ slip) and then filled the tanks and headed out the next morning for Poet’s Cove to check in to customs and then to Sidney the following day. The non-sailing sailors taking their boat to go live on. LOL!

We arrived at Van Isle Marina and immediately I called my friend Sara (and by friend I mean that I’d never met her in person but had connected with her on Facebook and knew she was in the marina living on her boat with her family- yay! This is how we roll in the boating community- friends are often those we’ve never met!) and asked if she wouldn’t mind helping us dock. That was the beginning of a very fun friendship with our friends on sv Riki Tiki Tavi! (Thanks guys!)

Moving forward, Sara helped teach us some sailing and navigating and we got our boat fixed up. Her name was ‘Dream Too’, which we all hated- so we eventually renamed her in the summer of 2015 to Bloom- to represent our family’s life blossoming into something new and gave her the TLC that she deserved. Here are a few ‘after’ shots. She turned out to be pretty- who knew!? The main cabin and galley Carson’s room is the v-berth where he has his own private head and lots of space for his books and toys. Our nice, big dinette where we spend most of our time. The view from the aft cabin. 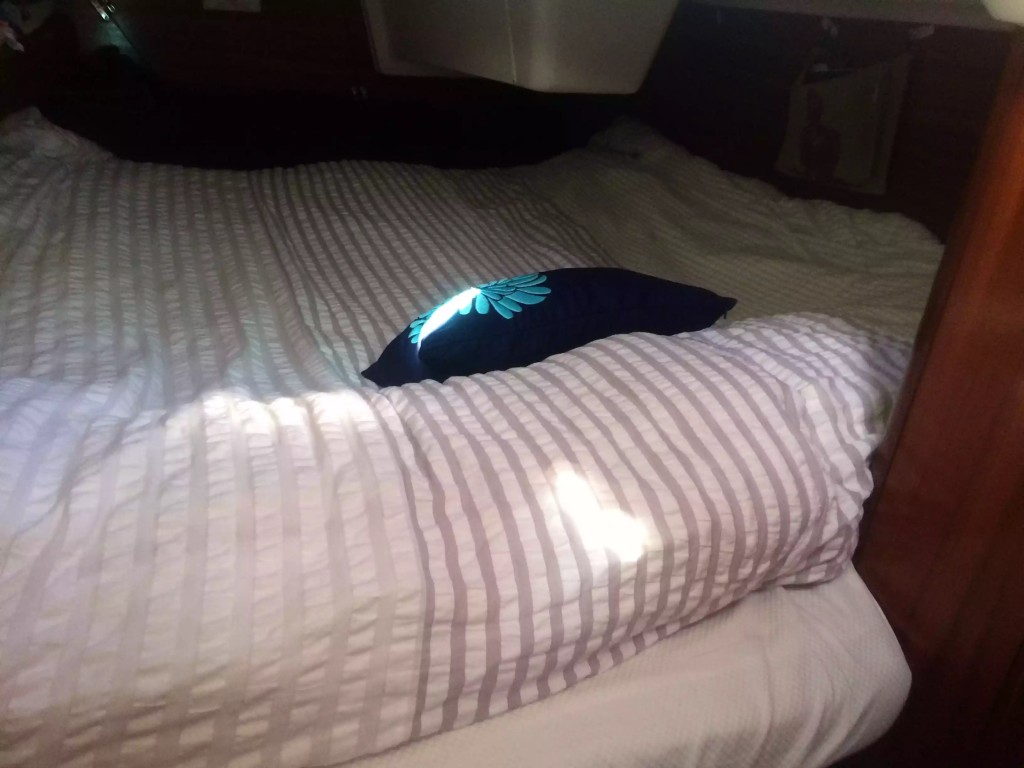 The aft cabin where Jason and I sleep has a king-sized bed but not a lot of head room. We call it our ‘cozy cave’. Our aft head gets buddhaized in an attempt to make the head a bit tranquil. A few cockpit cushions make all the difference! Bloom on a mooring at Otter Bay, North Pender Island, BC